The animation is the manipulation of image sequences to create the illusion of movement. Some may argue that animation was first created in 1879 when French engineer Charles-Emile Reynaud projected the first animated film in public.

But what about the 5,200-year-old bowl discovered in Iran, which shows 5 images painted along its side? When the bowl is spun, the rapid succession of images shows a goat jumping towards a tree to eat a pear.

And what about prehistoric cave paintings, which show a sequence of figures carrying out a hunt? This depiction of the movement to tell a story is the ultimate basis of animation.

The History of Animation is such a fascinating look at the way we as humans have expressed our imagination and common interests for thousands of years.

Zoetrope
Let’s go to China, 180 AD. This was when Ting Huan created the oldest known zoetrope. This device consisted of translucent paper, or mica panels, with art painted on them. When hung over a lamp, rising heat would cause the zoetrope to spin and the images appeared to move.

Thaumatrope
This optical toy is a flat disk with a picture on each side and two pieces of string attached. Twirling the strings quickly allows the two pictures to blend into one, creating the illusion of motion. The first commercial thaumatrope was registered in 1825 and became a widely popular toy for entertainment and simple amusement.

Phenakistoscope
The phenakistoscope (say that three times fast) is a spinning disc attached to a handle. Propped up vertically, the user would spin the disc and see a succession of images through slits via a mirror. From dancing women, mice running out of black holes to whirring geometric shapes, this popular Victorian parkour toy was pretty psychedelic! This invention is mostly attributed to Belgian physicist Joseph Plateau in 1832. Fun fact - Plateau had originally enrolled at the Academy of Design in Brussels before eventually pursuing science instead.

Zoetrope 2.0
In 1834, William George Horner produced the modern version of the Zoetrope. He originally named it the Daedalum (wheel of the Devil). Horner was an esteemed British mathematician, teacher, and headmaster. His invention of the modern zoetrope was a valuable contribution to the scientific world of optics.

FlipBook
Every child’s favorite DIY (before the iPad generation perhaps), the flipbook was first commercially patented in 1868 by John Barnes Linnet. In flipbooks, characters are drawn one frame at a time with a minor change from one frame to the next. So simple, yet so satisfying! Flipbooks have experienced a comeback in recent years in various genres and as valuable collectibles as well.

Praxinoscope
Finally, the invention that bridged the gap from tabletop entertainment to the large screen. The praxinoscope was a toy with a rotating drum and a mirror ring in the center, with a strip of drawings on the inner wall of the drum. By rotating the drum, the drawings truly came to life!

Years after first inventing it in 1879, and with the advent of the celluloid (transparent plastic made in sheets from camphor and nitrocellulose, used for cinematographic film), Charles-Emile Reynaud made improvements that allowed the images of the Praxinoscope to be projected on a large screen, thus giving birth to Optical Theatre - the original cinema for the public. At long last, animation created for projection onto a screen was born. His first film of 500 hand-drawn images was presented in 1892.

From mass-produced patented toys to scientific advancement, these early devices of animation paved the way for today’s exciting and intricate world of computer animation. 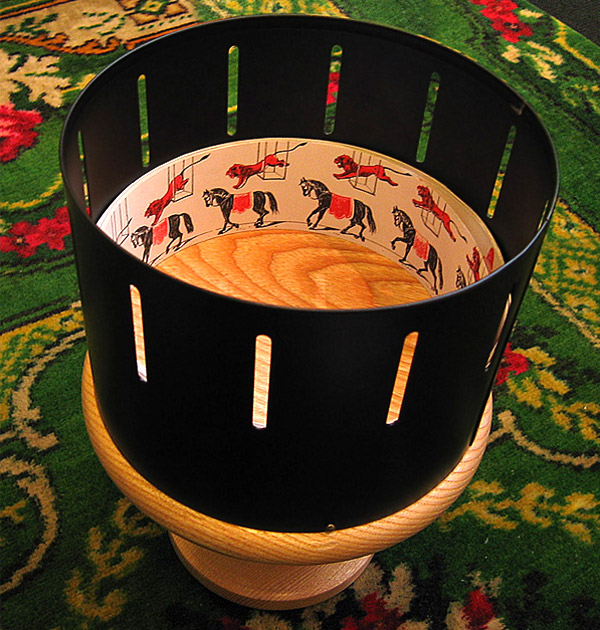 A modern replica of a Victorian zoetrope

The Pioneers of Animation

From scientists to creative photography enthusiasts, we owe a lot to the pioneers of animation.

Reverand H.W. Goodwin enjoyed projecting lamp slides of Bible stories in his Sunday school teachings. In 1887, he invented nitrate celluloid film that could hold images to replace the cumbersome process of glass-plate photography.

Thomas Edison used this celluloid film to develop the Kinetoscope. This device allowed individuals to view the film through a peephole, displaying a transitional perspective (animation) every 46 frames per second.

George Eastman loved to experiment with photography. He quit working as a bank teller to open his first factory where he eventually perfected the 100-exposure roll of celluloid film in 1889. Thin, transparent, and flexible, this film roll became the industry standard for motion pictures and animation. Have you ever heard of Eastman-Kodak? That’s the one!

Thanks to these pioneers of film, the next phase of animation would soon take flight. 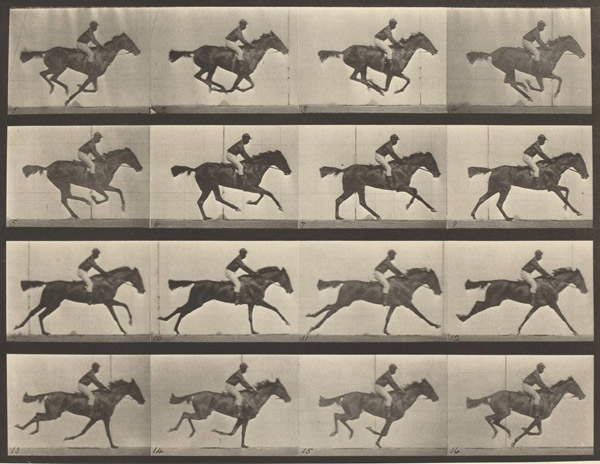 Cartoon animations bring back our fondest childhood memories, and it all started in the early 1900s.

In 1906, Humorous Phases of Funny Faces was released by James Stuart Blackton. This silent cartoon is regarded by historians as the first animated film recorded on standard picture film. However, Blackton used stop-motion and cut-out techniques versus only hand-drawn cartoons.

The very first true cartoon animator was Emile Cohl. In 1907, Cohl began making his first animated cartoons in Paris, France. Fantasmagorie was his very first cartoon - a series of progressive drawings photographed on motion picture film.
These films fueled the fires of entertainment, giving artists a new way to express themselves. A new breed of artists emerged, and where before art might have been realistic or abstract, whimsical art became more and more prevalent. Nonsensical action and fun silliness became the new normal for a whole century to come!

Walt Disney released the historic animated short Plane Crazy in 1928, his first cartoon to every feature the famed character Mickey Mouse. One critic wrote, “The cartoonist has employed his usual ingenuity to extract a volume of laughs that are by no means confined to the juveniles”. Walt Disney would then build an empire out of animation, to the delight of people of all ages and backgrounds. 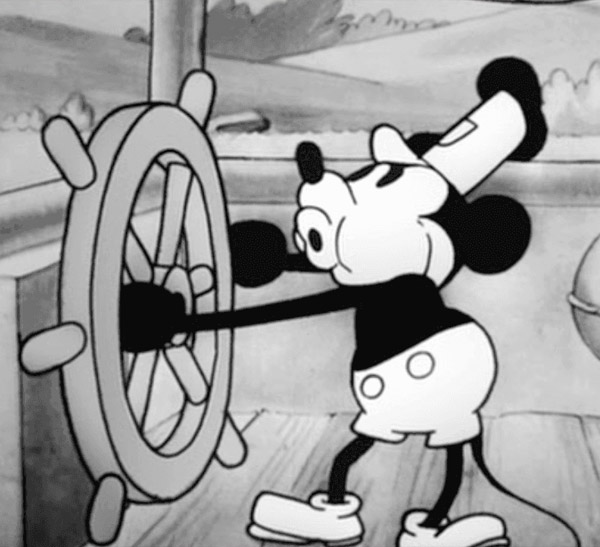 Cell Animation
Have you ever watched The Simpsons? Family Guy? Futurama? These cartoons are drawings made on transparent celluloid paper that is laid on top of one another to combine characters and backgrounds. That’s right, hand-drawn!

Stop-Motion Animation
Stop-motion has such a unique look to it that’s very satisfying to watch, but extremely tedious to execute. This style is created by taking multiple ‘shots’ of a model or puppet in sequence and then run together. The tiny tiny changes make it appear as smooth motion. It can take weeks for the production team just to complete two minutes of footage!

Some notable stop motions made from clay animation are Gumby, the little green humanoid, and Celebrity Death Match, a parody cartoon about sports entertainment programs made popular on MTV.

Computer Animation
When you hear people talking about 2D and 3D, they are referring to the types of computer animation based on 2-dimensional drawings or 3-dimensional models. Think of the movies Aladdin (2D) versus Shrek (3D).

More and more movie studios have begun creating movies in 3D over the last few years as 3D animation continues to gain popularity. Again, the common element between 2D and 3D animations is that they are created digitally on a computer. (Remember, every scene of The Simpsons was drawn on paper first!)

A great example of CGI is the movie Avatar. Live actors in specially designed outfits swinging in front of a giant green screen had their body and facial movements digitally mapped out, then translated to computer-generated images. Those mesmerizing bioluminescent algae glowing in the forests of Pandora? That was CGI simulating the way actual light reacts to a surface and produces particle effects.

In more traditional animated feature productions, such as award-winning masterpiece “UP”, or The Lion King, Toy Story, Incredibles, Frozen, Despicable Me, Minions, and many others, the facial features in animation resemble the actors, voicing the models. 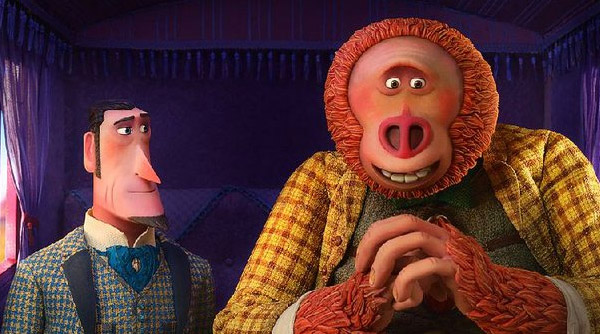 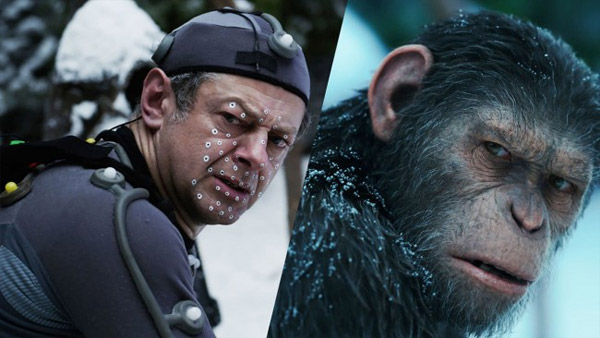 From prehistoric cave paintings to mass-produced children’s toys in the 1900s, it’s amazing to see how animation has become such an instrumental role in all aspects of our lives today.

Outside of the film and entertainment world, the animation is also a key component in any successful business. 2D/3D animation and motion graphics are powerful story-telling tools which are absolutely vital in areas like:

These types of applications are our specialty here at Immix Productions! If you’re interested in utilizing animation to enhance your product marketing, call us at (713) 789-8699‬ for a consultation.

To see more examples of our storytelling and product marketing animation, Click HERE.

To view more of our creative samples, please visit our ANIMATION section at immixproductions.com