Virtual Reality and Augmented Reality are revolutionizing the world as we see it. This is heightened specifically by an immediate transition to a “stay at home” environment, remote working, and social distancing. In today’s “media-everywhere” world, an extra element is needed to get past the noise when trying to broadcast and communicate your message. VR/AR is proving to be that element by putting the audience into a whole new world… captive to your message! In this article, we will be going through the evolution of this technology, as well as its advantages, and key benefits, especially when it comes to marketing, advertising, and training.

Although the terms Virtual Reality (VR) or Augmented Reality (AR) are well known and are quite established nowadays among pure technologists, there is still some confusion about the details. Before diving into the specifics of each technology, it is important to understand the difference between VR and AR, and ultimately MR (Mixed Reality). While Virtual Reality (VR) engages users in a simulated digital ecosystem, Augmented Reality (AR) overlays virtual objects to the real-world environment. AR applies algorithms and sensors to recognize the view of the camera and then overlays 3D graphics and objects into a user’s view via either a smartphone, glasses or specialized projections. On the other hand, unlike VR, AR offers users more freedom of action and doesn’t require a head-mounted display. To put this simply, as described in one of the Cramer Insights blog articles – “With virtual reality, you can swim with sharks, but with augmented reality, you can watch a shark pop out of your business card. While VR is more immersive, AR provides more freedom for the user, and more possibilities for marketers because it does not need to be a head-mounted display. Finally, the Mixed Reality (MR) not just overlays, but anchors virtual objects to the real world, which is a combination of both, VR and AR.

The History of Virtual Reality and Augmented Reality

Charles Wheatstone invented and designed the first stereoscope, which used an image for each eye to create a 3D image for the viewer. Since then, VR/AR technology has evolved at a rapid pace, with major milestones during modern times, as depicted in the graphic below and an excellent article titled: History of Augmented Reality by Michael Isberto, Technology Blogger for Colocation America. Below are a few highlights… 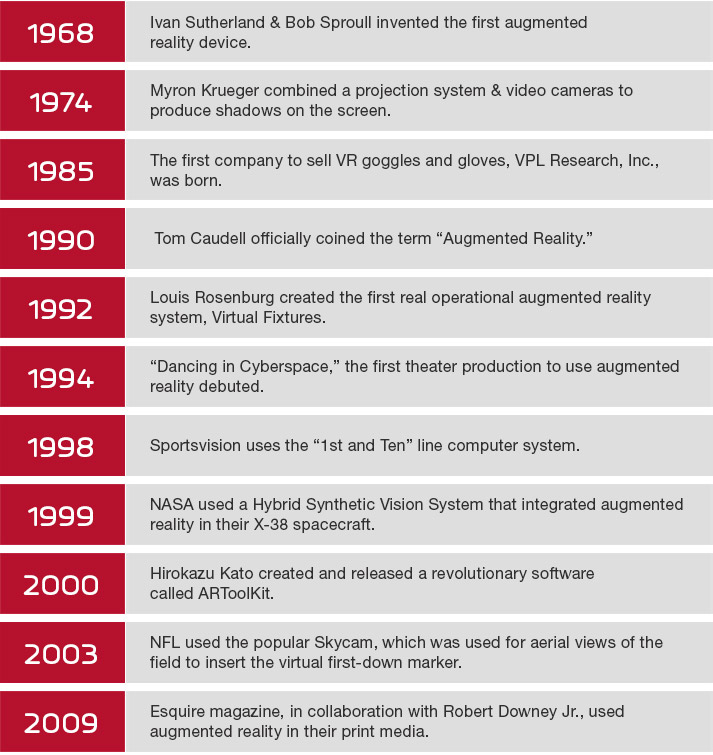 Starting with 1968, when a Harvard Professor / Computer Scientist, Ivan Sutherland along with his student, Bob Sproull invented the first augmented reality device. They called it “The Sword of Damocles”, which was a head-mounted display, hanging from the ceiling. The user would experience computer graphics, which made him or her feel as though they were in an alternate reality. This technology was considered to be closer to virtual reality than augmented reality. The breakthrough in augmented reality took place in 1974 when Myron Krueger, in a project called Videoplace, combined a projection system and video cameras to produce shadows on the screen. This setup made the user feel as though they were in an interactive environment.

Through genius and innovation of two Atari visionaries, Jaron Lanier and Thomas G. Zimmerman, VPL Research, Inc. was born in 1985. This was the first company to sell VR goggles and gloves. In 1990, a Boeing researcher named Tom Caudell officially coined the term “Augmented Reality”. In 1992, Louis Rosenburg from the USAF Armstrong’s Research Lab created the first real operational augmented reality system, Virtual Fixtures. A robotic system places information on top of the worker’s work environment to help with efficiency. This system could be thought of like an early version of what most AR systems currently do today. In 1994, the first theater production to use augmented reality titled: “Dancing in Cyberspace” and produced by Julie Martin… depicted acrobats dancing in and around virtual objects on stage as a piece of art. In 1998, Sportsvision uses the “1st and Ten” line computer system. This system showed the original virtual yellow first-down marker during a live NFL game. A variation of this virtual first-down marker is now a norm in all televised football games today and is a big part of the augmented reality history. In 1999, NASA uses a Hybrid Synthetic Vision System that integrated augmented reality in their X-38 spacecraft. The augmented reality technology was used to facilitate and improve navigation during their test flights.

Another important advancement in the augmented reality technology took place in 2000 when Hirokazu Kato from the Nara Institute of Science and Technology in Japan created and released a revolutionary software called ARToolKit, an open-source library for making augmented reality applications that overlay virtual imagery on the real world. ARToolKit is maintained and hosted on GitHub, and it’s widely used AR tracking library had 160,000 downloads upon their last public release in 2004. Through the utilization of the ARToolKit library, we can capture real-world actions, combine them with the interactions of virtual objects, and with the use of a camera and the Internet, users can experience augmented reality. Like many of these inventions from the past, this heavily influenced what we experience today in augmented reality apps. In 2003, the NFL used the popular Skycam, which was used for aerial views of the field to insert the virtual first-down marker. In 2009, Esquire magazine, in collaboration with Robert Downey Jr., uses augmented reality in their print media. By using their software on one’s computer to scan the barcode on the magazine, the readers can experience augmented reality content. In this same year, ARToolKit makes augmented reality widely available for interaction with all major internet browsers.

It is evident that Augmented Reality has come a long way since its early conception, but the advancements in the past decade have been even more promising. In 2013, Volkswagen uses augmented reality as their car manuals. The use of the MARTA app through the iPad can help users view the internal workings of the vehicle so the service mechanics know what they are dealing with. The MARTA application can also show successive instructions to help mechanics with the projects they are working on. It can even help with replacing parts. It can be as specific as which direction the parts should be facing. The MARTA app can be used for more cosmetic projects as well, including visualizing how different color paint jobs can look on your vehicle. In 2014, Google Glass is revealed and is made available for consumers. The Google Glass wasn’t as successful as developers hoped it would be, but it did show the potential of what wearable augmented reality could be. The second iteration already seems to be more promising and more useful. Instead of using the Glass to scroll through social media and other applications, factory workers are using the technology to help with everyday work. It helps walk the workers through their daily tasks and be more productive and efficient. In 2016, Microsoft introduces the next iteration of wearable augmented reality. The HoloLens seemed to be everything that the Google glass wanted to be, but certainly not as discreet and wearable in everyday life and undoubtedly more expensive, considering that the price range of $3000 and $5000 is out of most people’s budgets.

Augmented reality has also infiltrated the gaming world as well. The Nintendo 3DS comes with AR Cards that trigger integrated AR games. Just like Pokémon Go, users will see your favorite characters in the same room as them, Snapchat has even created its AR games that are built right into the application, where the use of facial gestures controls all your movements in each game. Minecraft and Roblox, which are my Daughter’s favorites, are both, good examples of interactive and virtual reality gaming applications, and while both games allow multiplayer action, Minecraft lends itself more to solo play, while Roblox allows users to design their games and play a wide variety of different types of games created by others. The platform hosts user-created games and virtual worlds covering a wide variety of genres, from traditional racing and role-playing games to simulations and obstacle courses. As of August 2019, Roblox had over 100 million monthly active users, as it focuses widely on social interactions and multiplayer engagement from the minute you sign on, with “friending” and “chatting” becoming instantly a huge part of the game.

So why are virtual reality and augmented reality so appealing in marketing?… first and the most important reason for integrating VR/AR-based applications into our marketing strategies and advertising is that they help to create a certain emotional connection with customers, increase brand awareness and encourages customers to make purchases simply because they can see and experience the product virtually making purchases easier, and more fun! This ultimately will evolve to more engaging and purely interactive user experiences for products, services, and brands. In Real Estate, for example… VR/AR will offer homebuyers more insight with having a way to visually see the measurements, furniture placement, and other qualities of the home, which will pique their interest and generate more sales. VR/AR marketing allows companies to bridge the gap between experience and action, and especially during the era of social distancing and remote working, amid CoronaVirus (COVID-19) containment effort. Virtual Reality and Augmented Reality already offer a digital experience in place of a physical one, an effect that was impossible to experience years ago but now can promote your products and services, remotely. When it comes to training, that remote capability lends to a major advantage for a trainer and trainees. For instance, companies can put their trainees in hazardous environments that would be too dangerous to put them into real-world scenarios. VR also stimulates more of the viewer’s senses, therefore, making it easier to retain that training. And then again, it is just more fun!!

At IMMIX Productions we were able to easily phase into the VR/AR space due to our long history of interactive development and CG animation going back close to 20 years. Top-quality 3D Animation, Motion Graphics, 2D/3D Modeling, UI Design, and Integration as well as working seamlessly with VR/AR hardware manufacturers and content delivery networks help us in being an attractive source for AR, VR, and Mixed-use applications. Our animation samples, case studies, and success stories are available by visiting the IMMIX Productions website, and for specific virtual reality and augmented reality examples, please contact our Creative Team (713) 789-8699 to discuss your current project. 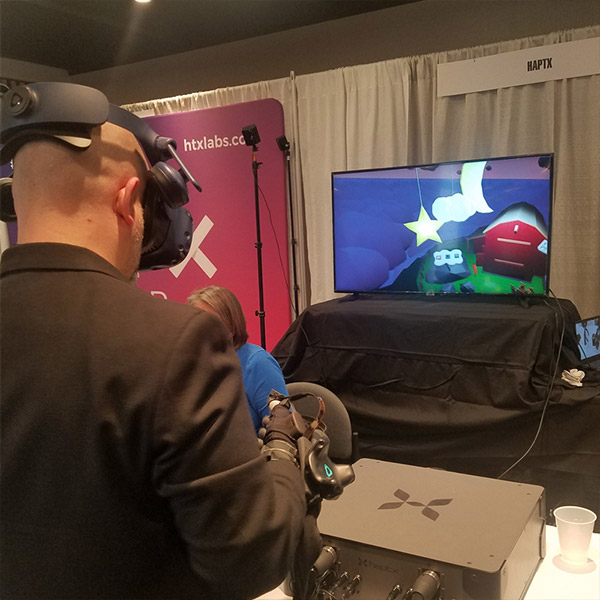 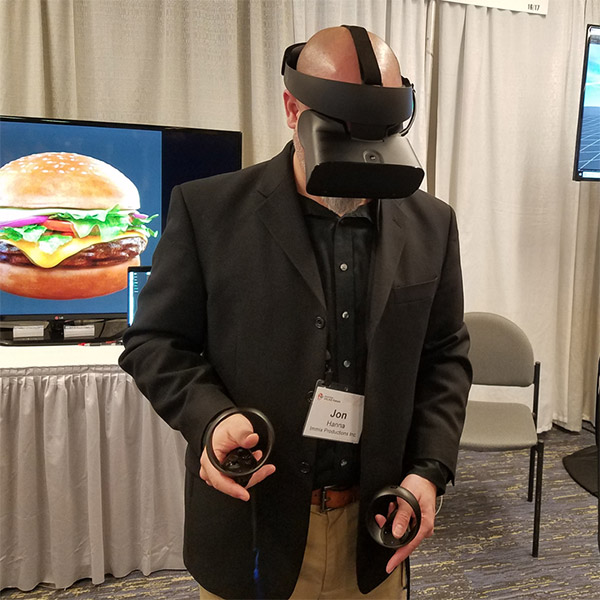