The world’s energy ecosystem is evolving as we speak, especially considering recent changes to the U.S. Administration, with future policy modifications in the forecast. The most recent “Monthly Energy Review” (MER) from the U.S. Energy Information Administration reports monthly/annually on domestic production and demand statistics, capturing all significant trends in all energy aspects during the past 50 years. These remarkable trend formations are peculiarly fascinating since the 2008-2009 recession period. Our team at IMMIX Productions Inc. has worked with and empowered the Energy Industry with Creative Development Solutions, Visualizations, and 3D Animations for the past 18 years, which allowed us to be at the forefront of so many of these trends, and technological advancements.

Too many numbers and stats for one post, so below are a few take-aways. ( Source: U. S. Energy Information Administration / Monthly Energy Review January 2021 ) 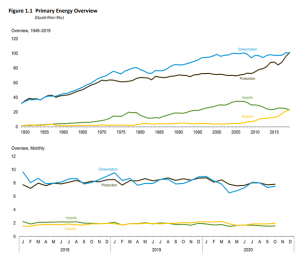 Rising “Energy Exports” since the 2008-2009 period have converged with a systematic annual decrease of “Energy Imports” and as of Oct 2020 have reached an equilibrium, however, the short term graph is showing the U.S. Energy exports trending above imports. 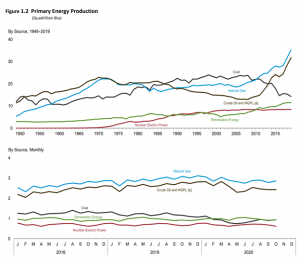 Nuclear Energy pretty much unchanged each year since 2000.

Coal Energy is trending significantly lower every year since 2008-2009. 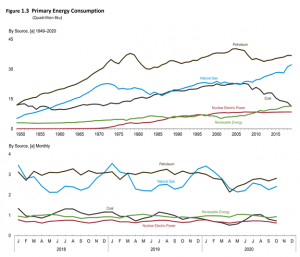 As to “Energy Consumption,” there is a significant uptick for Natural Gas during the past 12 years, with a modest uptrend for Renewables and Petroleum.

Similar to coal energy production, coal demand has decreased significantly every year since the 2008-2009 recession.

There is no significant change in Nuclear Power demand for the past 12 years.

It will be intriguing to see what is at the forefront for the upcoming several years. Still, my prediction is for “Renewables” to play a more significant role on both fronts, production, and demand. The key players and petroleum multinationals will need to find new markets, solutions and adapt to this new, constantly changing playing field. Some of the energy giants, such as ExxonMobil, have been criticized in recent years by investors, clean air advocates, and elected leaders for not contributing enough to curb climate change. With that said, ExxonMobil announced on Monday, 2/1/2021, their $3 billion investment over the next five years, supporting energy projects that lower emissions.

ExxonMobile’s first focus area will be to research and develop solutions for capturing carbon dioxide emissions from industrial plants and storing the gas before it enters the atmosphere, contributing to global warming. This new business model called “ExxonMobil Low Carbon Solutions” involves 20 carbon capture projects worldwide, including Texas, the Netherlands, Singapore, and Qatar. Many climate experts have said that such carbon capture and sequestration will be critical in the fight against climate change.

Several energy giants and oil/gas multinationals such as Shell and ExxonMobil above are starting to invest in lower-carbon technologies. It includes renewables, wind, solar, and new mobility alternatives such as electric vehicles (EV’s) and hydrogen. It is evident that in the modern, post-2020 era, interconnected power businesses will provide electricity to millions of homes, companies, businesses, and communities. For example, to meet the growing demand for renewable energy, Shell has been investing in wind projects across the U.S., the Netherlands and is currently exploring additional opportunities worldwide. Check out this video describing how Shell is investing up to $2 billion a year in cleaner energy solutions through its New Energies business. Shell’s experience and commitment to lower-carbon technology explore opportunities and new commercial models focused on transforming the world’s energy.

General Motors is striving to establish a safer and better world on the automotive front, which will require commitments beyond just accelerating EV adoption. They recently announced plans to become carbon neutral by 2040, including aspirations to eliminate tailpipe emissions from new light-duty vehicles by 2035. GM’s business model, as inspired by Norway, where 54% of new cars sold are Electric Vehicles / EVs, and they will have more on this during the upcoming Super Bowl. Here is the sneak preview of their Super Bowl AD, featuring Will Ferrell. Besides being funny, as always, of course, it is Will Ferrell; the AD does an excellent job of highlighting some very cool EVs, including Hummer Truck and Cadillac SUV.

“I’m excited to be a part of GM’s commitment to EVs. I’ve been driving an EV since the mid-’80s….well, actually, it was a regular car with 4 AA batteries taped to the carburetor, but it felt like an EV! We’re coming for you, Norway !!!” – Will Ferrell.